skip to main | skip to sidebar

George Washington Was a Homosexual?

And there we have it...some love letters have been uncovered by historians in Paris that are the correspondance between George Washington and his lover, Guy Raffleur III, an eccentric in Southern France. The Leuvre's Office of Antiquated Items (L'Office du Materiales Antique) is currently holding the letters until further study can be done, but early findings are proving the letters to not only be completely genuine, but shocking in nature.

From the depths of my heart, dearest friend; I live not for the setting sun, nor for the trickling water that abades my restlessness in the evenings. But for you I loathe the distance that divides us, that conquers our souls as though they were threshed wheat on a blustery plain; or a locked chest with naught but the treasures of islands lost. Dearest Guy, I wish for the day that we can retire in bliss in the hills of great lands and clutch each other as thieves clutch their gold. We will be Kings of the Universe and the creators of love.

Some of the letters are disturbing in their description of Washington's lovemaking. Le Louvre is intending to do a show in Paris over the next four years that will expose Washington as both a homosexual, but also that Guy Raffleur III was in control of much of America's political development.

Washington never went to France (and in those days you couldn't hide such travel. When John Adams went to France it took over a year out of his life. No such missing year for GW) So this French fella must have come to America.
You really thing GW would have sent torrid homo love letters on a two-month journey to France, at a time when such letters were routinely opened and copied? Also the text reads too modern, like a romance fantasy from the 1800's.

I have my doubts about him being a homo,but i do know people back then were more eloquent when they spoke and wrote the english language,and not every second word was Fuck.god fucking damn it or mother fucker.I am pretty sure someone doesn't understand how the english language has changed even in the last 50 years.

That is ridiculous. To suggest that the Father of our Country was a homosexual is both ludicrous and insulting. To suggest this of any of our founders is absolutely disgusting.

Also, as someone else has already mentioned, Washington never went to France and I have never even heard of this Guy.

Secondly, George Washington was a Christian. He had a very moral character and knew right from wrong, he was, by all-accounts, a gentleman and knew how to control himself.

Have we really come so far as to suggest that anyone in those days who had a close friendship to someone of their own gender was gay? Ridiculous.

Anyone who believes this, or other accounts like it ought to be ashamed of themselves.

"Friedrich Wilhelm Ludolf Gerhard Augustin von Steuben (november 15, 1730 – November 28, 1794) was a Prussian-German army officer who served as inspector general of the Continental Army during the American Revolutionary War. He is credited with teaching the Continental Army the essentials of military drill and discipline, helping to guide it to victory. He wrote the Revolutionary War Drill Manual, the book that became the standard United States drill manual until the War of 1812, and essentially served as General George Washington's chief of staff in the final years of the war.....

...On September 26, 1777, he, his young secretary and male lover Theveneau de Francy and four other very young handsome male traveling companions, reached Portsmouth, New Hampshire and by December 1, was extravagantly entertained in Boston. Congress was in York, Pennsylvania, after being ousted from Philadelphia by the British advance. By February 5, 1778, Steuben had offered to volunteer without pay (for the time), and by the 23rd, Steuben reported for duty to Washington at Valley Forge. Steuben spoke little English, but German and French were known by many officers. Many troops were immigrants and therefore spoke German. Colonels Alexander Hamilton and Nathanael Greene were of great help in assisting Steuben in drafting a training program for the Army, which found approval with Washington....

... Steuben gave assistance to Washington in demobilizing the army in 1783 as well as aiding in the defense plan of the new nation. He was discharged from the military with honor on March 24, 1783...."

There is nothing wrong with Washingtons homosexual orientation. Most of the founding fathers fled Europe because they were gay or pedophile.

George Washington was not gay. That's simply how men in powdered wigs spoke to each other back then.

Even if he was and im not saying he was but it would not have been a bad thing or a blimish to him. Being gay is not a horrible thing it is love no matter how you look at it. I hope all you close minded hypocrites look in your own closet in stead of pointing fingers and judgeing others as you have proven time and time again that is all yall can do.

Go to his Mt. Vernon home and take the tour... he was gay. He had to be. Everything is like "QueerEye for the Nations Father!" "George Washington picked out this paint, and George Washington picked out these drapes, and this Silver and China set! Oh, he chose this furniture too!" The the real fun... he was a fan of wrestling? Now that's a red flag isn't it? Then you go up stairs and Martha's room was on one side of the house... his was way on the other! Martha had kids from a previous marriage... no kids from the gay guy! I mean no kids from George Washington! And down a little flight of stairs from George's room... his study where he spent much of his time... and outside of the study? The manager of the plantation... who I swear to Zombie they said was a lifelong bachelor.

I came away with a different view of the guy... I'm guessing the Cherry Tree story has a few twist in it we aren't being told... and that picture of him crossing the Delaware? Clearly that is a gay dude making a grand entrance.

You do know two of GW's main generals were homosexuals. Theirs reports of him having a relationship with tree men that I know of (not this one though) also it's said that he actually had no "fire" with his wife so resulted to men. Also even if he wasn't homosexual he was excepting of it which means he is farther in time then you which is quite sad because he was around 300 years ago. Please stop being so ride and homophobic. We have no exact way of telling if he was homosexual or not. I'm quite sure the father of our country wouldn't want people that he gave independence to be so rude upon his name.

^l-m-a-o. i completely agree. i visited mt. vernon for the first time the other day. he was the liberace of his time.

Precisely! And I've researched this "Guy." There was no such person from what I can tell.

The only person in Washington's army that I'm aware of who may have been a homosexual was Baron von Steuben. And I don't think this person is being homophobic. Or intends to offend. Just simply stating one's opinion.

There just simply isn't any evidence that Washington was gay. On the contrary, from what historians can tell, Washington seemed to be rather fond of, and attracted to, women. And the letter sounds very suspect.

Washington definitively spent some time in France and was a great friend of Talleyrand and admired and learned from him the art of diplomacy. just like Jefferson in Paris both left behind all kind of "juicy" stories. These 2 were NO angels. We have created a myth of integrity and goodness that fulfill Americans need for heroes. And what if he was homosexual ? This certainly would have made him more human. Going to France has been a tradition for gay, leftist, blacks.........all people who were persecuted by American narrow mind.This is still going on. A large American artist community still lives in France. Get your "heroes" down their pedestals ...and accept them as humans. 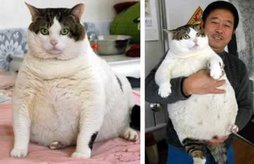 Don't you think this little guy is cute?

Vlad
I am interested in providing the public with useful tidbits that might help them throughout their lives. Plus I just put some really neat and fun information on this blog. Oprah Is my Mentor and Hero.